“You can observe a lot by just watching,” Yogi Berra once said. And as I’ve learned Memphis I’ve spent a lot of time driving up and down the streets, east and west on the avenues, from Collierville to the river. Being a Midtowner I’ve spend most of my time west of Highland, along Walnut Grove or Central Avenue - avoiding congested Poplar Ave wherever possible - up and down Belvedere and McLean and Cooper here in Midtown, and out and back along Madison for trips to either the environs around Overton Square or for trips Downtown.


Y'all already know that Madison Avenue became one of my favorites. As observations go, it started with just a feeling. A sense both of what Madison is and what it was. Trip after trip I began to realize, in no particular order:

That it is far less congested than Poplar or Union.
For just over half it’s length, there are the remaining trolley tracks and supporting cables over the street (a note on the trolleys later)
There are dozens of older, charming, one- and two-story commercial structures up and down the avenue.
Bars Restaurants Tattoo parlors Second-hand stores Record stores Recording studios Music venues.
It has Overton Square, the original Huey’s, the Gilmore Building and Fino’s.
It passes Marshall Ave, which leads straight to Sun Studios.

And it has the most elegant and dramatic westbound entrance to Downtown. Past Marshall, over a curve and a weave in the road above Danny Thomas Blvd, and then down a gradual approach through brick buildings, toward the light towers of Autozone Park and into the modest Memphis skyline.

I’ve learned that much of Madison remains intact, with a few notable exceptions, like parts of the Medical District, old Russwood (baseball) Park, the interruption of the 240 overpass, the Cash Saver parking lot and the plot of land that was once home to good ol’ Anderton’s Restaurant. But over the length of its four-plus miles it has generally not been paved over, commercialized, demolished, or swept aside in favor of fast food drive-thru’s or chain drug stores, like what has happened on Union Avenue.

I’ve shared these observations with a few people. I’ve learned that efforts like this have been started before, specific to Madison. More recently, when I’ve spoken of Madison to people in the know, Madison home-owners and business owners and life-long preservationists, I’ve gotten the ah-ha’s and the yes’s and “I’ve got some stories!” Their eyes light up.

And then I sometimes get this: “So are you an historian, an architect, in city planning…?”

Nope I’m not. And by starting this Madison Avenue project I created quite a task for myself. What was conceived of as just a photo essay has turned into what it’s turned into: a daunting no-deadlines endeavor to piggy-back on what others have done to continue to document and preserve this iconic Avenue, and tell some of its stories along the way. So no, I’m not an historian, in the sense that I don’t have a degree in history. I’m not on any government boards or commissions, I’m not a city planner, and I’m no architect. (This is actually a good thing for this project, since I’m not tied to any agency nor private firm with any agendas or biased interests.)

However, growing up everyone told me I was going to be either an architect or a city planner or both one day (insert George Constanza jokes, here), because one of my main hobbies as a kid was drawing and sketching and building anything and everything related to cities: detailed buildings and cityscapes and maps and views-from-above. I was obsessed with cities.

So was the late great Jane Jacobs. And I’m not suggesting that I can stand toe to toe with Ms. Jacobs - if I can come anywhere close to what she accomplished I’d be declared a saint here in Memphis - but she is most definitely the perfect role model in my efforts. Like me Ms. Jacobs was not a city planner. She did not hold a degree in history.

Ms. Jacobs was a writer and an editor. And she was passionate about the city she wrote most about, her Manhattan neighborhood in the 1940’s, 50’s and 60’s. Among her greatest strengths were both her love for her neighborhood and her powers of observation.

In those aspects her and I have a lot in common.

But Ms. Jacobs saw what city planners of the late 40’s and early 50’s could not see in their studies. Cities in those days were perceived as overcrowded and dirty and industrial, not for raising families. And while leaders and planners, back by heaps of federal dollars, were focused on the highway system and the movement of people and their automobiles out of or around cities and out to the suburbs, from her window or stoop Ms. Jacobs observations told her that so-called super blocks and vast plazas don’t work, that highways destroy neighborhoods, that parking lots and sprawl are wastelands for pedestrians. But that the neighborhood, the intimate city-scape, does work.

So do city streets belong to cars or people? Let’s think about this in the simplest of terms. The most successful streets and neighborhoods have a healthy mix of both. Here in Memphis think of Overton Square, Cooper-Young and South Main. What makes these high-density neighborhoods vibrant and attractive? Just-enough street parking or occasional parking garage and lots of walkability. Shops, restaurants, clubs, and services within residential walking distance, and with their proximity to the street, highly-visible. These areas are more conducive to mass transit, or Uber, because of simple pick-ups and drop-offs. More foot traffic and people crossing streets means vehicles must move slower through these areas, which reduces the frequency and degree of collisions. Lastly, more people and more activity at all hours of the day serves as a deterrent to crime.

As I mentioned in my previous post, my journey will begin at East Parkway and move west to Downtown and Front Street. But why that way? Why east to west? Doesn’t Madison begin at Front Street? 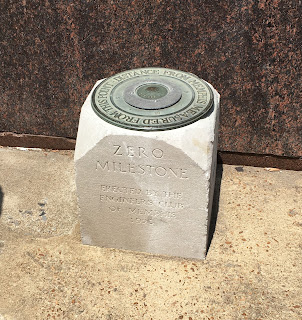 It does. In fact there’s a marker at Front Street that designates Madison and Front as a kind of starting point, from zero, of Memphis to all points beyond. And Memphis legend and storyteller and historian Mr. Jimmy Ogle himself told me, just Tuesday, that “Madison starts here! It starts at zee-roe!” He was quite adamant, and of course 100% correct.

Something else I learned from the same Jimmy Ogle this past Tuesday, is the fact that Madison doesn’t even end at Parkway. Ugh! Argh! Damnit! The nice little bookends of my study are ruined! Truth is, as Jimmy explained, many people forget that Madison starts up again over Parkway, past Lindenwood Church, and weaves its way through a residential neighborhood before ending at the parking lot for the Lipscomb & Pitts Building in between the Poplar and Union Avenue viaducts.

Thank you Jimmy, and I completely agree with you that Madison starts at Front, but I have my reasons in starting at Parkway. The first reason honors history - East Parkway (once named Trezevant Street) was for many years Memphis’ eastern city limits. The second is purely practical - the Memphis newbie here knows more about Madison in Midtown than he does yet of Downtown, where there’s a lot more history and much more research necessary. I’ve already started my Midtown research, have already loaded up my iPhone and iPhoto with Midtown-Madison pictures, and have interviews lined up with home and store owners in Midtown. And frankly, the people who would know Downtown-Madison of the 1920’s first-hand are buried somewhere in Elmwood Cemetery, whilst more of the Midtown been-there’s are still around for me to badger, and I need to talk to them and soon. 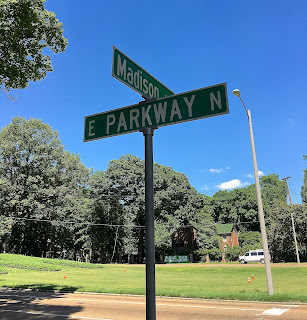 I also like to think of my Parkway start in a romantic sense. A stepping back in time if you will, starting with the more recent and still-accessible history in Midtown and making my way west, back in time, toward Downtown and back to the very beginnings of our city.

In addition, there’s one other sympathetic notion of mine that wants to start at Parkway: a little-big something called Memphis Heritage.

Memphis Heritage - memphisheritage.org - at 2282 Madison Ave in the Howard Hall mansion, is a non-profit organization dedicated in its efforts to preserving Memphis’ and Shelby County’s rich architectural history. It was founded in 1975 and it “continues to be the voice” for the preservation, improvement and reuse of the area’s “architecturally and historically significant buildings, neighborhoods and parks.”

Today MH is under the guidance of executive director June West, who may be the latter-day Memphis version of Jane Jacobs. (And hey, separated by only one vowel) There are many in the city devoted to preservation, who donate, act, and/or provide or arrange funding to preserve significant structures here in Memphis. And there are many in the city who are virtual walking Memphis encyclopedias. But I think I’d get few arguments that when it comes to preservation June is Memphis' leading custodian.

If you want to do more research of your own, you could start by searching the archives of the Memphis Daily News or the Commercial Appeal or the Memphis Flyer with key words like 'preservation,' 'heritage,' 'historic,' and so on.  Like this article from June 8, 2009, which is particularly noteworthy as it applies to my project.
https://www.memphisdailynews.com/news/2009/jun/8/decaying-heritage-historic-preservation-reaches-tipping-point/

So it seems quite apropos to start my four-mile-long journey into Madison’s past, present and future with the very heartbeat of Memphis preservation, and 2282 Madison Avenue, Howard Hall.

Next week’s post will spotlight Howard Hall and a hundred-year-old house two blocks in from East Parkway.
Posted by Mark.n.Memphis at 3:37 PM