A Tried and True Memphian Has Left Us

We lost a beloved family member this past weekend. She was born here in Memphis, she accompanied my wife to California in 2004, and she returned with both of us last October in our trek across the country and back to Memphis.

She brightened our mornings, our days, and our evenings in front of the TV. She was easy-going and never raised a fuss. She didn’t read the newspaper, she didn’t get involved with what’s happening in Memphis, she wasn’t aware of the Greensward battle, nor school closings, budget cuts, shootings, de-annexation, or how the city council runs things. And she didn’t care. All she knew was that she was happiest here in Memphis and when we were by her side.

She was our cat. Little Miss Sable. And she died quietly in our arms Sunday morning, on of all days, Mother’s Day. 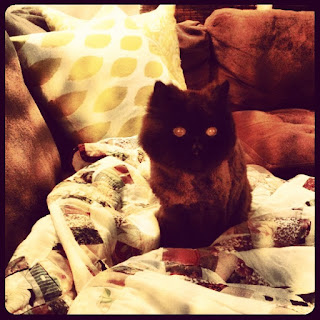 Of course I wouldn’t devote a blog post to something so apparently irrelevant and unrelated to Memphis if not for two things. First, her life and passing just deserves the honor - this is my little eulogy. And, little Sable was a lot like Memphis, determined and odds-defying.

There’s a great moment in the movie “As Good As It Gets,” when Jack Nicholson’s acerbic and obsessive-compulsive Melvin Udall tears up while playing the piano in his living room, a private moment of longing after returning to his neighbor the adorable little dog Verdell, with whom he had formed an unexpected bond. Mr. Udall plays the piano, holds back tears, looks over at the empty dog bowl on the floor, laughs at himself over getting weepy and says, “Over a dog!”

Now if you’re not a cat person, just bear with me. But my wife and I were more than weepy Sunday over our little one. In fact the grief I felt that day hurt more than I imagined it would. And the fact that Sable passed on Mother’s Day was all the more … ironic, apropos, extra sad… I don’t know. Because for my wife, little Sable was her only “child.” 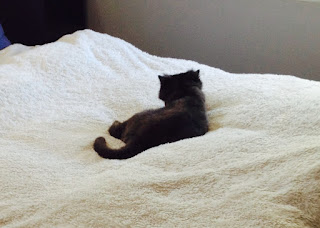 Sable - I often affectionately called her Toots or Tootsie - lived a long life of almost 20 years, especially long for a Persian. Persians are often prone to a variety of kitty illnesses: leukemia, heart disease, kidney problems. And though Sable didn’t suffer from any of those, her life began and was filled with various health problems. She was a runt of the litter, and could fit in my wife’s one hand. Her vet here in Memphis, when he first examined Sable the kitten in 1997, said to my wife, “You paid $300 for this one?”

And in that spirit I think of her as a true Memphian. Born here, she was my wife’s companion through thick and thin. From their early days off Kirby Pkwy and Poplar, to their little apartment at the Kimbrough, and finally two-thousand miles west to California, she and my wife were partners through ups and downs. And then came me.

As fate and grace would have it, I was lucky enough to meet them in the late spring of 2011. I fell in love with them both. 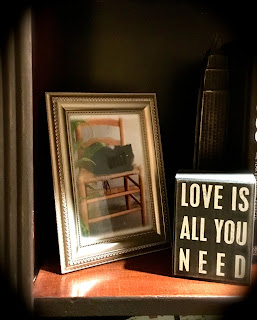 By then Sable was already pushing 15, but she was sweet and spunky and obstinate as though she were more than half her age. She liked to rub on my shoes when I would get ready to leave, as if to say “don’t go.” She would hop up on the sofa, plant herself right next to you, and stare at you until you petted her. On those evenings in the front of the TV, she would grant you about an hour of cuddling next to you - not on you, Persians aren’t known as lap cats - but when you’d scratch her little face and then take a break she’d paw at you and grab your hand and pull it back toward her.

Like many cats, she loved drinking out of a faucet. In her case she preferred the bathtub. But in her older age she couldn’t jump up and in by herself, so she’d inch her way toward the front of the tub, look up and stare at you until you got the message that she wanted in, and when she knew you were reaching down to pick her up, “You want in the tub, Toots?” she would let out a meow or two and start purring until she settled in under the drip drip drip of the faucet. #whysyourfacewet

Sable was born missing one fang. And animals lovers know that a missing fang means she had trouble getting food into her mouth. So eating for her was a chore. At times she looked like someone bobbing for apples, fighting for every bite. On many occasions my wife would sit with her and feed her bite after bite of her favorite crunchy snacks, and Sable would do her little balancing act, put her head up, and use gravity and her tongue and her other little fangs to get the nibble into her mouth. 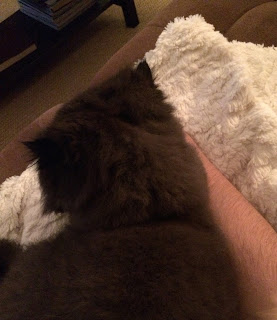 And then there were sushi nights. In Newport Beach we lived around the corner from a sushi restaurant. And whether we dined in or picked up our food to go, we would always get an order of salmon sashimi (Sake, as they call it), or sometimes Maguro (tuna) just for the little beast. And before we could open up any containers, she could smell the fish and she’d be all over us. Even if she were fast asleep in a back bedroom, we’d give her a whiff of the fish - “Sable? Want a treat?” - and she’d hop down and follow us all the way into the living room. (We had sushi just last week, so Toots got a little fresh salmon treat in her final days)

Every year she got a little older and we had to babysit her a little more. Each morning we’d look around the house for errant, um, tootsie rolls. “Oh, she went in the bathroom again.” Or, “Look under the desk.”

“Sable… Tootsie! What are you doing little nugget? Your box is clean. Why here?”

As it turns out, we think it was our house in Newport that was the culprit. In our three years in that house we had a running, not-so-funny joke that the house was cursed. I’ve mentioned this is prior blog posts, but it was in that house where we endured floods and court fights and family deaths and all sorts of challenges that came at us weekly. We are sure that Sable felt all of it, taking on our stresses and acting out in ways only cats can. And when we packed up our car and walked out of that house bound for Memphis, we knew we were leaving behind a time and a place that all three of us - me, my wife and Toots - were all too anxious to leave behind. 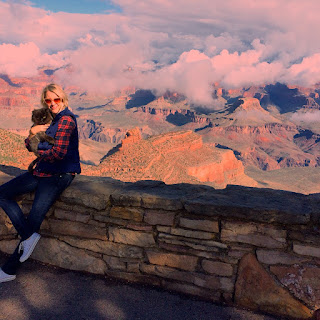 We had fears about how well our little almost-19-year-old would fair during our 2000-mile journey, hours upon hours in the car and each night in another hotel room. But we made the back seat into a little Sable bedroom, and she did just fine. We even let her meander around above the rim of the Grand Canyon - she couldn’t run anymore, so we just walked along by her side as she enjoyed the sights and smells of the great outdoors. And the owners of a little restaurant in Shamrock, Texas even invited her in so she could enjoy lunch with us. (Thank you The Roost).

Once we arrived here in Memphis and settled in, she was comfortable right away. She ate more. She didn’t look 19 going on 20. She looked, oh, not a day over 13. Everyone would ask, “She’s nineteen? No way!” She seemed more perky. And we didn’t find random morning surprises around the house anymore. It was as though she knew she was home, where she belonged, back in Memphis.

In her very last days we all, Sable included, kinda knew the end was near. Our vet (the excellent Dr. Debes at Walnut Grove Animal Clinic) told us it was something neurological, maybe a tumor or a minor stroke. Sable was having trouble knowing where she was. But she could always sense us, and wanted to be close to us. Never the lap cat, she would sleep on our laps or my chest for an hour or more. She wanted our attention as close to 24-7 as possible. Never before liking to be held, in the last days she would yell, “Meoaarrrw!” at me from across the room until I picked her up and held her, and put her right next to me while I worked. And, she was right there with us, in our laps, until her very last moments.

Our little Memphian. With a true Memphis heart. She was resilient. She was lovable. She “talked” to strangers. She defied all odds. She will be greatly missed. But we were lucky to have had her.