Who Is Memphis Anyway?

I’ve been trying to figure it out. I’ve been considering everything from the music to the food to the style of dress, have been taking in city attitudes and prejudices and politics, have driven or walked along the avenues from South Main to Midtown and all the way out to Collierville.

One thing is for certain, the term “Mid-South” is most definitely appropriate. Get in your car and drive a little over three hours in any direction and you can end up in any one of seven states, seven, not including Tennessee, from Alabama to Illinois. Tack on another 2-3 hours beyond that and you can add another six or eight states to the mix. That’s up to sixteen states, including the TN, within less than a day’s drive. That’s exactly one-third of the lower 48. Not many cities, if any, can make that claim. It’s no wonder then why Memphis is a natural as the transportation hub of the country, and why Mr. Smith moved his little air freight business here in 1973.

With so many states surrounding us, I get the sense that Memphis is a perfect melting pot of the towns, cities and regions that are within our reach. Who Memphis is is a mix of a little bit of everything right here over the bluffs.

Let’s start with the food. The food! Now I had to do a little extra research for this, but here goes.

The fried catfish I love so much comes from Mississippi, most of it from Humphreys County, down near Vicksburg.

The shrimp and grits I crave every now and then is borrowed from the Gulf Coast. The grits from descendants of African slaves as a traditional breakfast food, the addition of shrimp from North Carolina (look it up), picked up by Charleston and city by city all the way down to Nah’lins (New Orleans, my poor pronunciation).

The fried chicken originated, according to my research, from African slaves in Scotland who were introduced by the Scottish to the methods of deep frying chicken in fat. African slaves brought their methods here to the South, added spices, and there you have it.

BBQ, our Memphis-style, pork rib and/or shoulder, slow cooked for hours, sweet tomato-based-sauced BBQ, originates with inexpensive cuts of meat, cultivated again by Southern African-Americans as a means to feed their families on the cheap.

I’ll stop there with the food. But do you notice a theme? Most of the traditional Southern fare we white folks love so much comes from our African-American friends. I realize many of you know this fact, but I had an ah-ha moment over it a few years ago, and the irony has stuck with me now that I live here.

How about Memphis music? We are The Home of the Blues and The Birthplace of Rock ’n Roll. And we can’t forget the 60’s soul music out of Stax Records. But where did it all come from?

I’ll keep it short, but our blues was birthed from good ol’ Delta Blues from Mississippi that spread in all directions, and was taken to the halls and clubs along Beale Street, the old Beale Street, owned by African-Americans and long before the King assassination and urban-removal.

Rock ’n roll comes from all over the South, a combination of African-American blues, jazz and soul, thrown in to a mix of country music and old country swing. Its earliest incarnations actually could be heard in the late 40’s and early 50’s, but we all know where it really took off. Two guys, Phillips and his little studio called Sun, Presley and his hips, mixin’ it all up into what to me is still definitively Memphis.

And of course the soul music of Stax Records, born here in Memphis in the old movie theater converted into recording studio, where Booker T. and his MG’s and Pickett and Otis and Hayes made vinyl history.

The same African-American-roots theme emerges from our music as with our food.

And it all makes sense. Let’s take a quick look at Memphis’ industrial and demographic roots. What drew people here way way back in the day? The cotton trade and slavery of course. When the Memphis and Charleston Railroad was completed in 1857 it established the only west to east rail line from the Mississippi River to the Atlantic Ocean, and Memphis became the means to ship cotton from Southern plantations all over the South, to the Atlantic and on to England. Memphis boomed. 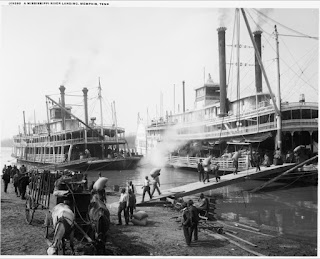 And then after the Civil War, yellow fever. Not just one outbreak, but several. Enough to take tens of thousands of lives or to drive thousands of people away from the city. And who fled? Mostly the upper classes who could afford to leave, leaving behind a rag tag group of some Irish, German, and a majority of, you guessed it, African-Americans.

Into the late 1800’s those poor whites and blacks who were left rebuilt the local economy on the continued need for cotton, and later for lumber. With a rebuilding economy, and with the yellow fever long gone, elite white men returned to reclaim the city.

I don’t have to tell you about the years of conflict that ensued.

Fast forward to today, and me sitting in on one of those big business breakfasts east of the 240. One of the speakers is starting off his speech by apologizing for the scruff in a week-old beard, telling everyone that he promised his college-age daughter he wouldn’t shave so long as her college basketball team continued to win. Now, I typically sport a 4- 5-day old beard, and as I looked around the room I realized that I was the only man among almost two hundred, besides the speaker, who had whiskers below his chin. (This wasn’t the image I had when moving to Memphis. St. Louis or Indianapolis maybe, but not rockin' ’n rollin’ Memphis.)

And then something else happened. As I continued to look over the crowd of clean-shaven faces, bow ties and navy suits of the same shades and colors, I started to notice a distinct lack of color. Out of the close to two hundred mostly men sitting and listening to the speaker, I am sure I could count less than ten African-Americans. These were influential business leaders in a city more than half minority, and only about 5% of Memphis’ black population was represented.

And then it hit me. The pattern emerged. Picture clean-shaven white men talking bottom lines versus the hot oil and jive in Gus’s kitchen. Bow ties and tight-lipped suits juxtaposed with the swivel of Elvis’ hips.

Who is Memphis? Memphis in the last hundred and fifty years is textured by the black culture of the Mississippi Delta mixed with the age-old influences of white men and the cotton trade. It’s still here. Call it the Mississippi River Mix. There may no longer be cotton traders up and down from St. Louis to New Orleans, but history is a powerful thing. The foundations of cities form the character of cities, by generations upon generations passing down industry, food, stories, attitudes and perceptions. And those old Memphis influences from up and down the river are still mixed in the mud.

We’re not a country music town like Nashville. We have little cultural influences here from Arkansas, as best as I can see anyway. Our Tennessee bourbon may be a derivative of Kentucky bourbon, but Memphis is a Mississippi River town. The railroads may travel west-east carrying goods but the culture, the DNA, the grit(s) and grind and soul, who Memphis is, is still delta influenced.

And it’s still in conflict.

Of course not even close to the degree it once was, but it’s still there. It’s there in the 1% of the city’s total for business receipts by Africa-American-owned businesses. One percent! In a city where the population is more than 50% black. It’s there, as reported in the Commercial Appeal earlier this year, in the “'statistical inference of discrimination’ in the issuance of (city) contracts.” Its there in the way daily murders of predominantly black of blacks is so flatly delivered in the news as just another, well, this is Memphis today, and now for your Mid-South weather.

I’m not pretending to have any answers. And perhaps no one ever will. Memphis has oh about two hundred years of discrimination under its belt to simply be wiped away in the here and now.

The racism, though by all appearances docile, still exists. Talking to a friend the other evening, we touched on this issue. “At least Memphis talks about it to a degree,” he said. True. The Mayor has discussed it, business leaders discuss it, our Congressman Cohen has discussed it.

But away from print and the spotlights, behind closed doors or during daily commutes on the 240, it’s thought. A bitterness that sits just beneath surface, said in afterthoughts. I’ve heard them.

“Memphis will never be what it once was.” Or “Used to be you could go downtown, and we didn’t have any problems.” And “There was a time everyone knew their place, and it was fine.”

Yes, it’s still here. Older generations for sure, who forget that the Peabody isn’t boarded up anymore, but it’s here.

And then I think about the irony again, in how so much of what we celebrate about Memphis today, the food and blues and soul music in particular, was born and raised right here in this town by generations of African-Americans. It’s no wonder then, as I learned recently from Wanda Rushing’s Memphis and the Paradox of Place, that there were many mainstream Memphians, older whites and even some middle-class blacks, who for years didn't like the idea of Memphis as the birthplace of rock ’n roll. It still shocks me to hear older Memphians say that they “never really cared for that Elvis.” His music and the rest of the blues were viewed as “racial,” “outsider,” and associated with “low-down culture.”

Which takes me back to my first question. Who are you, Memphis?

The people I spend time with, in the progressive circles of all the organizations dedicated to Memphis change, seem to understand and embrace what Memphis was and what it can be. But there is still that other, older Memphis that hasn’t quite shaken off the Memphis of its collective youth, when “everyone knew their place.”

And to those older attitudes that are revealed in private conversation, I want to say that hey, this is not a city of cotton traders or slavers anymore. The heyday of the old Cotton Carnival is long gone. Like it or not, this town grew up in the mud of the Mississippi Delta, like weeds you cut down for years and years, cut down, bulldozed, paved over and built over. Those weeds have bloomed and flowered, and you’ve had over fifty years and a couple of generations of Memphians to embrace them. Stop the bulldozing and face the music, cuz it’s damn good.

You native Memphians may know this, it’s in your blood, but we newcomers are discovering it anew. And though I still don’t have that Who is answer, I think I’m getting closer. Your thoughts folks?
Posted by Mark.n.Memphis at 5:23 PM