Today I’ll start with this recent de-annexation business. I want to weigh in on it, but really I've only just begun to have enough research under my belt yet to give it my two cents. However I will say this: the vote by the state legislature in favor of allowing certain cities, under vote, to in effect secede from the city of Memphis seems to be another one these jabs at our city from the state capital that I keep hearing about. And I understand that there’s the potential to lose 80-something million in tax revenues if all the targeted cities follow through on leaving, but it also seems that these cities would be doing themselves quite a disservice by choosing to leave the comfort the resources of Memphis provide and instead rely on the resources of Shelby County?

That's my first take on it. I'll have to revisit that topic after I learn more, and there's always room to learn more.

But on a topic where I feel qualified at this point to have an opinion - this battle between the Memphis Zoo and Overton Park-ing.

Much has been written about the city council’s hastily drafted resolution and March 1 vote - while park vs. zoo mediation and studies were in progress - to allow the zoo to use the park Greensward for overflow parking, so I’m not going to repeat what’s already been said ad nauseam. But I will say this from the perspective of someone new to Memphis and new to the South: parking on a greensward of a city park that's on the U.S. National Register of Historic Places seems backward and in glaring conflict with what Memphis claims to want to be.

In my search to understand Memphis and all of the history-I-cannot-know-because-I-didn’t-grow-up-here, among the many books I’ve been reading, I am near finished with Memphis and The Paradox of Place, published in 2009 and written by Wanda Rushing. It is a dense, academic study of What Memphis Wants To Be (my caps for emphasis). In her book, Ms. Rushing explores what Memphis was, what it is, and where it might be going. She places Memphis within a struggle to understand its sense of self, remaining true to the Old South versus striving to be part of the New South, comparable to an Atlanta or a Charlotte.

Now it seems to me that if Memphis’ leaders are intent on putting the city in a position to compete with those cities, or to even outshine Nashville, then casting votes that look the other way in allowing an organization to encroach on an historic city treasure seems like a shot in the foot, and on the wrong side of progress. From an outsider's perspective, allowing overflow parking on a park green seems backward and makes us look like a city unable or unwilling to move forward. People and businesses looking to relocate here could look at Overton Park and the city council’s position and instead of seeing a city and a park going green like the rest of the country, will see… an historic park being used as a parking lot?

Here’s a recent google maps image. Look at the damage already being done on the greensward. And with the city council’s ‘green’ light, how long before the zoo files motions to pave this? 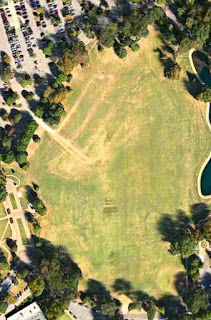 Its seems ludicrous. Imagine reactions if parking were allowed on the Sheep’s Meadow in New York’s Central Park. Or parking on the rolling greens of Boston’s Common, or allowing museum parking on the lawns of San Francisco’s Golden Gate Park. It doesn’t seem possible that a forward-thinking metropolitan city could condone, let alone approve, such an action.

And yes, I know, Memphis has the more important issues of poverty and crime and education to deal with. But the Greensward controversy serves as a very good example of what Ms. Rushing explored in her book, and is something I will be exploring as I search for the heart of Memphis. And a central question that begs many questions around what Memphis thinks it wants to be.

What kind of city does Memphis want to be?
Why do developers and entrepreneurs see such golden opportunities in Memphis?
What kind of city does the city council envision Memphis to be?
What does Memphis treasure for it’s future? And in it’s past?
How big a role does racism play in city politics and business?
Is fear and regret holding Memphis back?
Where lies Memphis’ true heart?