(If this is your first visit, I encourage to read my first post, titled First Post - Introduction)

If you’ve never been to Memphis, what references first pop in your head about the city? Elvis? Graceland? Beale Street? Fedex? The place where Martin Luther King Jr. was gunned down?

Your references may stop there. If you give it another few seconds thought you might also think food - BBQ, fried chicken - or music - isn’t Memphis where rock ’n roll got started? - or crime - doesn’t Memphis have a high crime rate?

Before I met my wife that’s about all I knew about Memphis. Before 2011, before I fell in love with the city, I had been here once, for business, and like every frequent business traveler, I often saw a city only from the airport or from the inside of a hotel room before visiting a client. 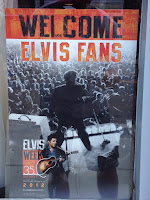 The summer of 2012 was the first time I spent any amount of time here. Visiting my wife’s family, I got to see East Memphis, which at the time to me looked like Any Suburb, USA. We ate at Central BBQ. Not bad! We ate Gus’s chicken. Pretty good! We visited Burke’s Books in a re-emerging Cooper Young neighborhood. Kinda cool. We toured Sun Studios. Goose bumps. I love music, I grew up listening to my dad’s Elvis records, so Sun was an experience! Very memorable!

In two blinks we passed through downtown and by the Peabody Hotel. I think I caught a glimpse of the brick facade of Autozone Park. We stayed at the River Inn in Harbor Town. Very nice. We ate at Paulette’s. We went down to South Main. I had a soul burger at Earnestine & Hazel’s and got spooked by their ghosts. Awesome!

And we visited the Civil Rights Museum. 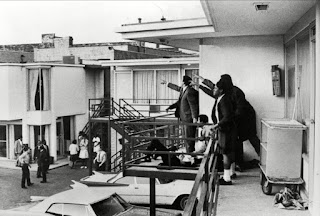 There are not enough adjectives to describe the experience one has in visiting the miracle that is the Civil Rights Museum, built into the Lorraine Motel, where Dr. King was murdered “Early morning, April four.”

The country would be a much better place if every high school student across the country were required to visit this place, one of the most important displays of U.S. history and one of the most moving and relevant narratives of our country.

But of all of Memphis, that was really all I experienced. On that visit and on subsequent visits I got huge doses of Poplar and Union avenues, which to me looked like Any Nondescript Suburban/Commercial Strip, USA. And when we discussed moving to the South, these were all the references I had.

I didn't know what I didn't know, not yet. I saw mini strip malls, fast food, banks… Nothing unique here. Nothing noteworthy. Beyond Elvis and Sun and the Civil Rights Museum, the rest of Memphis for me, at the time, lacked any real relevance.

Now I have this thing with relevance. And a sense of place. I crave them. I grew up in Orange County, CA, a few southern California cities that were unique only because they were, well, in southern California. Beaches. Sunshine. Tacos. Disneyland. That’s it. My grandparents and my uncles and my father came from New York. Queens. Da Bronx. Why couldn’t I have grown up there? Talk about a sense of place! Talk about relevance! History! Jazz! The streets! The subways! The Village! Why couldn’t I have been a New Yorker?

I could have moved there, years ago. I could have tried to make it there, as Sinatra says. But I stayed in so.Cal for one very good reason, and he’s now going on eighteen years old. But I digress.

I always knew that after so many years in Orange County that I would spend my waning years elsewhere. I grew up there, but I never had the sense of fitting in. I wasn't a surfer. I didn’t much care for sand in my shorts. I liked having seasons - you know, like cold, or rain, or snow - the OC has sunshine ALL the time, almost. It’s in the 70’s or 80’s ALL the time, almost. Try putting your sweater and your nostalgia on for Thanksgiving and a turkey roasting in the oven when it’s 85 and sunny!

The only sense of place and relevance and nostalgia I had was at Disneyland. There in that pretend place, there was always awe and adventure and life. But the rest of the OC? No, to me real life was somewhere else. Life. Seasons. Something real. Somewhere else. San Francisco to me was real. Chicago. Even Seattle. Of course Manhattan. I’d even take New Jersey. And hey, when I was in film school, Hollywood was pretty damn relevant. But for me, not the OC.

So when my wife first proposed the idea of moving to the South, I was enthusiastic. It filled me with anxiety, yes. But it seemed right. And we were ready. Adventure. Culture. Good Food. History. Something real. The South.

But where? With her family in East Memphis, Collierville, Oxford … should we move to Memphis? No. Memphis was a bit too close. We didn’t want family on top of us day in and day out. My wife had said she couldn’t ever see herself moving back here. I certainly couldn't see it after spending so many visits driving up and down Poplar. And, it seemed Memphians weren’t too keen on Memphis. The crime. I wouldn’t go downtown!  The economy. This city can’t even afford to fix the potholes! You’d be better off in Franklin or Nashville. Neighborhoods? Unless you want to live in Collierville, real estate values are going downhill. Things to do? There ain’t much to do here!  Yes, this is what we heard.

Ya’ll should move to Nashville!

Ah yes. Nashville was perfect.
A little Manhattan on the Cumberland.
Nashville it would be!

Until it wasn’t. When I would fall in love instead for the city on the bluffs. To be continued …